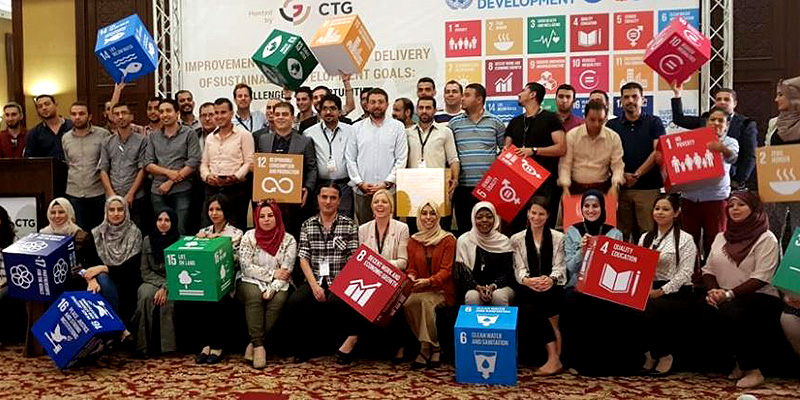 Inspired by CTG’s commitment to the SDGs, Mahmoud Shehada, our Senior Account Manager in Gaza, motivated for the first ever Committed to Good Summit; one in several steps to strengthen and localise our global impact strategy in Gaza.

Over the last two years, CTG has committed to making sustainability a key driving force of our business. With a key focus on applying Sustainable Development Goals (SDG’5), Gender Equality, we’ve pledged to balance the gender scales in humanitarian and development employment in conflict-affected countries, including Gaza, thereby playing our part in building peaceful societies and ending poverty.

This two-day SDG-focused workshop, which took place at the Al Mashtal Hotel in Gaza from 10-11 September 2018, aimed for practical actions to transform society at a local and global level.

The summit, titled “Improvement of Life in Gaza by Delivery of Sustainable Development Goals: Challenges and Opportunities”, brought more than 120 people together to focus on the SDGs, with the goal to form an SDG Council to ensure an ongoing conversation about its outcomes from both public and private partners.

Through a combination of keynote presentations by renowned experts, round tables and parallel sessions, the workshop opened a discussion among the different organisations and individual experts on solutions for a sustainable development to transform society at local level. These included major education and training institutions, major international organisations involved with the SDGs, global and national NGOs and social movements, as well as youth leaders, and higher education teachers.

As this was the first Committed to Good Summit that CTG has held, it’s fantastic that we got such a positive response – the invaluable contributions from the attendees showing how much confidence the people have in the SDGs.

CTG believes we can be part of a brighter future, even in the most challenging locations. Our core missions are to create job opportunities and economic prosperity in the countries we work in (SDG8), to be a change agent for Gender Equality (SDG5) and to ensure that everything we do contributes to creating peaceful societies (SDG16).

The idea came from my confidence that focusing on the SDGs will make a positive difference to the people in Gaza. People in Gaza deserve better, like all of us, leaving them behind is not an option – health, education, water, electricity & employment are their hope – I am confident that taking steps to achieving the SDGs is the key to peace and resilience in Gaza.

According to the World Bank, only 41 percent of those aged 15 to 29 are active in Gaza’s labour market. In an area with such a high unemployment rate, CTG has made it our mission to empower women and we currently have ten  female engineers employed in Gaza, an achievement considering the conservative setting and lack of jobs.

Our CEO Alice Laugher is a driving force for gender equality and is determined to change unconscious bias around the role that women have in the workplace (with a focus on conflict-affected countries), which led to her nomination as United Nations Global Compact SDG Pioneer for Women’s Empowerment in Conflict Settings at the 2018 UN Global Compact Leaders Summit. As chair of the United Arab Emirates Women’s Empowerment Principles task force, her unswerving commitment to help women in conflict-ridden regions led to her spearheading the CTG #FemaleFirst initiative, with the goal of at least 30% of all project-related roles represented by women by 2030.

The Gaza Committed to Good Summit was well attended by 122 delegates and representatives from 38 institutions. This was a fantastic turnout and shows the level of commitment to the SDGs for Gaza.

CTG strives for inclusion, diversity and gender equality and believes this is where we can make a real difference. I’m confident that working together on the SDGs will lead to a more sustainable future for the people of Gaza.

Watch our event after video for a recap.

Consisting of 12 panel presentations, a high level roundtable, and speeches by consultants, UN agencies and other stakeholders the range of interaction at the workshop provided a richly textured and reflective engagement with the SDGs. Key thematic areas and objectives included:

Bringing the SDG’s to life in Gaza

The summit commenced with a key note speech from Dr Maged Abu Ramadan, former Gaza Mayor, Trustee of St John’s Eye Hospital and Chairman of CMWU, who gave an illuminating speech about where Gaza currently sits on relation to the SDGs.

Basil Nasser, Head of Sub-delegation Gaza UNDP and Abdullah Hamdani from UNRWA, led a panel discussion around how the UN is one of the main partners for delivering the 2030 Agenda at the national level in Gaza.

The opportunities, challenges and priorities of the SDGs for Gaza

Mamoun Besaiso, Institutional Consultant and Advisor, then led a session where we learnt detail about the current situation in Gaza in relation to specific SDGs.

Private Sector: A Critical Force In Driving The SDGs

The SDGs are not just for the UN or the government; reliance on humanitarian aid doesn’t always create resilience so involving the private sector is key.

Engaging the Private Sector to achieve the Sustainable Development Goals

As Mamoun Besaiso pointed out in his opening speech, decent work drives sustainable development in and of itself. If Gazans are earning a decent wage then they can put money back into the economy.

SDG 5: The Importance of Women’s Empowerment In the Workplace, Market Place and Local Community

Azza Qasem a freelance gender expert, introduced the topic of gender equality to the conference. Ms Qasem raised some important cultural challenges to SDG 5. She pointed out how the term ‘gender equality’ is seen as a ‘western’ term and is still resisted in Arabic culture.

Ms Qasem commented that due to the situation in Gaza women are playing more of a role within families, many more women are educated and as more women are in work than before their economic power is increasing. However, Ms Qasem felt that in Gaza they are still dealing with the symptoms of gender inequality not the cause. She raised that the buzzword of gender equality is often seen as a way to get a job or funds from donors (given the worldwide focus on female empowerment) but it is not fundamentally believed in as an idea. In Gaza men are still the overwhelming majority in positions of power and make the key decisions.

How to Establish an Ecosystem to Make the SDGs Work 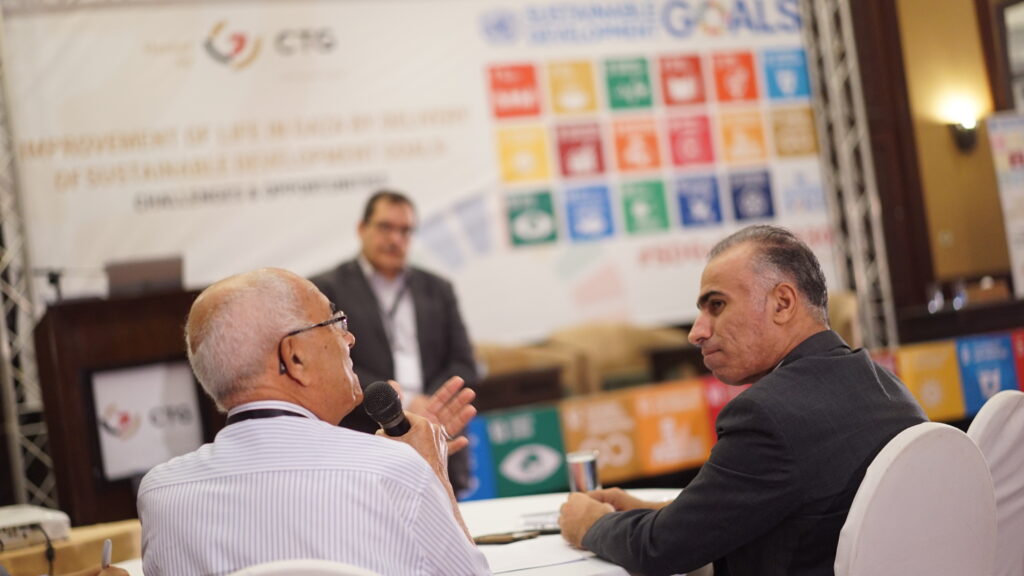 It was clear from the group discussions in this final session that the objectives regarding implementation of the SDGs need to be developed and defined from the inside. In order to drive ownership and commitment to the changes required, for the SDGs to improve life in Gaza, the analysis needs to be conducted in an integrated way and engagement from stakeholders throughout Gazan society is required.

The Gaza Committed to Good Summit was designed as a “call to action” and a way to start the conversation. It is clear from the successful attendance and the contributions of those attendees through the workshop that many in Gaza feel the SDGs are incredibly important to improving life in Gaza and want to continue the conversation about how they can be implemented.

As next steps, we suggest the formation of an SDG Council to ensure that both public and private partners work in a coherent way. The Council will bring together contributors from the public and private sectors to experiment and create strategies to unlock Gaza’s development potential. This SDG Council would promote and create a permanent and multidisciplinary knowledge network on implementation of SDGs, where all stakeholders will learn from each other.

Read our report on localising the SDG’s in Gaza.

CTG is part of the Chelsea Group, a dynamic family of companies.