Inspired by a goal to raise £250 000 towards prostate cancer awareness, Nick Butter is running 196 marathons in 196 countries. A world first. We chatted to Nick after his run in Mogadishu, Somalia where he was hosted by Chelsea Village. 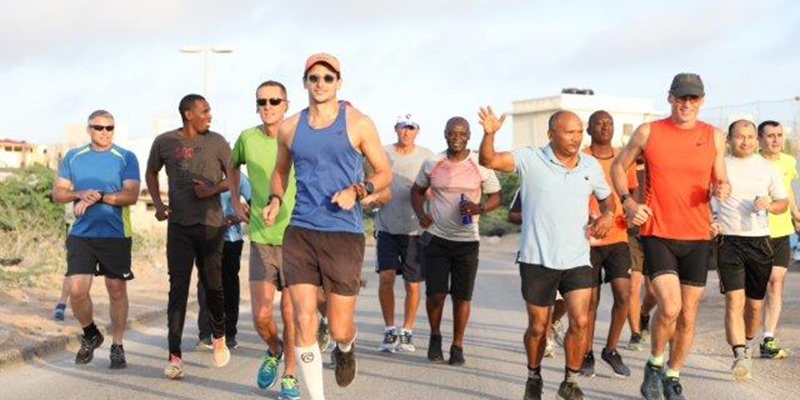 There’s a distinct link between challenging environments and inspirational stories, so when the team at Chelsea Village heard that Nick Butter would be running a marathon in Mogadishu for a good cause, it was easy to get behind him.

Today, Nick is on day 544 of his 558 planned endeavour to run 196 marathons in 196 countries around the world (a world first). That includes the hard places, even war zones. Inspired by his terminally ill friend, Kevin, to raise a goal of £250 000 towards prostate cancer awareness, Nick ran his marathon in Mogadishu in June 2019. The Chelsea Village team not only hosted Nick and donated $3000 to the cause, but ran alongside him in the safe zone of one of the world’s most hostile locations.

We managed to chat to him afterwards. We found out some little-known, yet alarming, facts about prostate cancer and why kindness still makes the world go around.

Why are you so passionate about prostate cancer awareness?

I’m hoping to help stop other men like my good friend Kev from dying. I met Kev while running a number of years ago and he was the inspiration I needed to make a change in my life. He told me not to wait for a diagnosis; meaning that life is short, precious and to be valued. Upon researching the cancer, I discovered it now kills more people than breast cancer and only has a fraction of the funding.

One man dies from prostate cancer every 45 minutes. Worst of all, nearly all these deaths can be avoided by early screening.

The moment the idea came into my head, it was only minutes before knew it was something I wanted to do, but there was still a lot of research and understanding ahead before I could fully commit to the challenge So much had to be considered – finances, safety, logistics, and timing. Over the course of two years, with the help of lots of brilliant people I managed to scrape together what we believed we needed to accomplish the mission. I can say now, we got most of that information wrong, but hey that’s adventure.

How did you mentally prepare yourself for running the world, something that has never been done before?

The beauty of doing something that’s never been done before is that the doubt of wondering if it’s possible is unavoidable.

This in a strange way just gave me the momentum to put my head down and get the job done. That said, I don’t believe you can truly mentally prepare for most things in life. You can make yourself believe you’re ready, and that’s the best bit. It’s about having faith in your own ability, knowing it will be hard, getting the gloves on, and fighting through all the challenges, until it’s done.

What has been the most challenging country you’ve run in so far?

Haiti was tough because it was 44 degrees, it was country number 4, and by this point my body was tired. I was mentally drained, and it knocked my confidence. I had a few moments of doubt during this run because of the heat and the safety. I didn’t feel entirely safe, and I had another 192 countries remaining. The road was long, and I realised that the two years would be a story of many ups and downs.

What country has surprised you the most?

Most of the countries I’ve visited surprise me in one way or another.

It’s often the case that my preconceived ideas of a nation are wrong, so I’ve got very good adapting to my expectations.

It’s nearly impossible not to have those initial thoughts about a country though. The people have been the key to everything on this mission. Without kindness and selflessness, I wouldn’t be enjoying it or likely successful.

With 77 of the 196 countries currently rated high-risk, how do you take security precautions when running in conflict-affected or danger zone?

Most of the time there’s an element of ‘hit and hope’. That’s not to say I’m flippant with safety, if anything I’m very cautious, not just for my own safety but for the success of the mission. Having contacts who can assist on the ground is the best way to stay safe. No matter what you read on the internet, it’s wildly wrong – this is mainly due to highly dangerous areas over a small space within a country which impacts the overall travel advice.

Often (and I say this with a smile on my face) there’s a direct correlation between the areas the foreign office advice not to visit, with some of my best experiences and the kindest of people.

You’re heading towards the end of your trip (November 2019) and have been running since January 2018. Along the way you’ve encouraged people to join you on your marathons – how would you describe the spirit of support from your fellow runners and the communities you run through?

The spirit of support during this journey has been fantastic. Above and beyond what I could have ever hoped for.

The togetherness, the willingness of strangers to make my experience safe, happy and memorable is utterly unfathomable. There are too many to mention, but I know this: people, human beings are the most incredible creatures, and I have learnt a great deal about mankind on this journey. I urge everyone to trust and rely on others, it’s the most amazing feeling.

What has surprised you about Somalia?

The coastline was a big surprise. It’s stunning, beautiful and calm. There’s something about the constant nature of waves lapping at the shore, coupled with the juxtaposition of horrendous conflict and death that makes me reflect somewhat more intently. Somalia is a country I didn’t want to leave. This wasn’t due to the coastline though, it was all down to the kindness of Costa (Costa Yiannakis, Camp Director, Chelsea Village an Enigma Alliance project), Stuart (Stuart Page, Enigma Alliance, CEO) and the team at Chelsea Village. Everything from being collected at the airport, to the small touches of a celebratory cake, and a hugely warm welcome. I will be speaking about this experience for my entire life. Thankful is an understatement.

How is Chelsea Village different from some of the other places you’ve stayed in?

Chelsea Village is a family. It’s a community of people that are smart and vastly aware of the real world. This comes together in the form of a calm environment. The staff, the Somalian guards, the guests, and the medics work as one.

The village is the best 5 star hotel I’ve stayed in, and yet it’s a few containers on the edge of an airfield with a conflict-affected zone just meters away. I never felt unsafe, quite the opposite actually; and above all I miss the place.

Buildings, hotels, and countries are nothing without the people and in this case the service of the staff. I felt I was one of them for 48 hours while still being spoilt. In my opinion the best hotels in the world offer an experience not a bed; the experience here was exceptional and kind. Never did I see the inner workings of the machine that keeps things working, but I saw enough to know that everyone I met there was happy. I would recommend many big luxury hotels around the world to look at the village as an example of the ‘Goldilocks Principle’. Just right. The chilled vibe is spot on. Thank you.

Chelsea Village is part of the Chelsea Group, a dynamic family of companies.